Findings from archeological digs at the ruins of the Benedictine Monastery and Freedman School on Skidaway Island will be presented on Thursday, January 30, by Laura Seifert, Savannah Archaeological Alliance Director. Seifert, who led the effort, will give an illustrated talk at St. Peter’s Episcopal Church (3 West Ridge Road) at 4:45 p.m. The presentation is underwritten by Skidaway Audubon, and there is no cost to attend.

The history revealed through nearly 12,000 artifacts found at the site dates from just after the Civil War.

With nearly 20 years of experience in archaeology, museums, and higher education, Seifert has spent her career working on archaeology projects from the Canadian border to the Caribbean, with a focus on the southeastern U.S. She worked at both Historic Mount Vernon and Historic St. Mary’s City before earning her Master’s degree from East Carolina University in 2006. Since then, this Savannah resident has been digging through her hometown’s museums and squares and has taught at the Armstrong Campus of Georgia Southern University (GSU).

Seifert’s students at the Armstrong Campus of GSU were instrumental in the Skidaway dig, which also included Benedictine Military School students, Savannah State University students, and resident volunteers from the Landings community. When The Landings was undergoing initial development, nearly 50 years ago, part of the site was set aside in recognition of its archaeological importance and will never be built on.

Interpretive signage has been installed at the location on Priest Landing Drive (corner of Breckenridge Lane and Priest Landing Drive) as part of a long-term initiative to identify historical and natural sites within the community. The signage was funded by a grant from Landlovers to Skidaway Audubon’s sustainability project, which sought certification of The Landings as a sustainable community by Audubon International, the first community to be certified in Georgia.

Bricks from the Freedman School recovered during the dig soon will be displayed at the site. Other artifacts found, many of which will be shown in photographs during the January 30 presentation, are in the permanent collection of Georgia Southern University, where they are available for research. 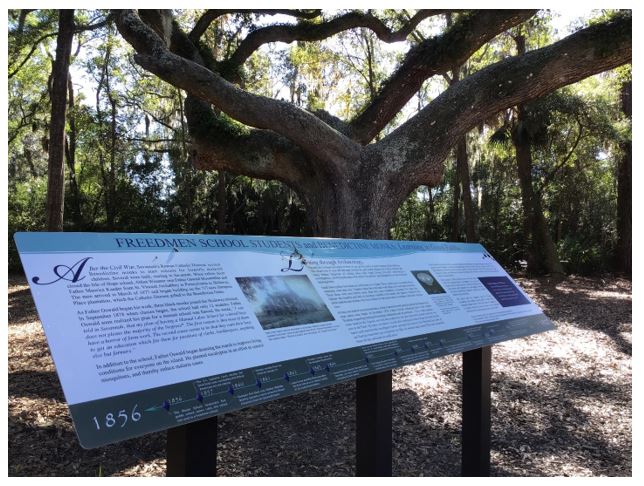 Interpretive signage at Monastery and Freedman School site on Skidaway Island to be dedicated onJanuary 30.