On the Security Scene

On Wednesday, May 18, in the early morning hours, a resident on Low Country Lane reported three unidentified persons entered his home and stole cash, jewelry, and two phones. Chatham County Police Department (CCPD) responded and searched the neighborhood with negative results. CCPD interviewed the resident and recovered one of the phones in the resident’s backyard. CCPD is actively investigating the incident, and Landings Security is reviewing video footage and assisting CCPD with their investigation. It appears that entry may have been through an unlocked door. The resident was not harmed during the encounter. No similar incidents were reported in the community or the local area.

Security, Chatham Emergency Services (CES), and CCPD responded to a single vehicle accident with injuries on Green Island Road just past the Westcross Road overpass on Sunday, May 15. The driver had been traveling toward the four-way intersection when he left the road, and the vehicle flipped and then rolled into the ditch before sliding to a stop. The driver was cited for failure to maintain a single lane. Both the driver and his passenger were transported to the hospital for medical treatment. The vehicle was removed from the scene via a tow truck.

On Saturday, May 14, Security responded to Marsh Rabbit Circle in reference to a stolen property report. Upon arrival, the responding officer spoke with the victim, a guest of a resident. He stated that he left his phone on a table in the pavilion at Landings Community Park. There was $100 in cash and a $25 gift card located inside the phone case cover. When he went back to get the phone, he did not check to see if the cash and gift card still were in the case. He noticed the items were missing the following morning. The victim did not wish to pursue criminal charges. The incident was captured on the video camera system and will be viewed by the victim and his parents in an attempt to identify the person involved.

Security responded to Saltwater Way on Friday, May 13, for a hit-and-run accident report. Several witnesses to the incident informed the officer that a vehicle sped through the area and, upon leaving, struck a mailbox. The mailbox, post, and numbers were damaged in the incident. Security was able to locate the vehicle on the video camera system and requested assistance from CCPD in identifying the vehicle’s owner. Security made contact with the individual, who stated she did not recall the incident but would pay for any damages.

** Please note that a brief synopsis is provided for pertinent incidents that Security responds to during the week. All incidents are not covered in the weekly recap. Statistics for all reports are provided below. ** 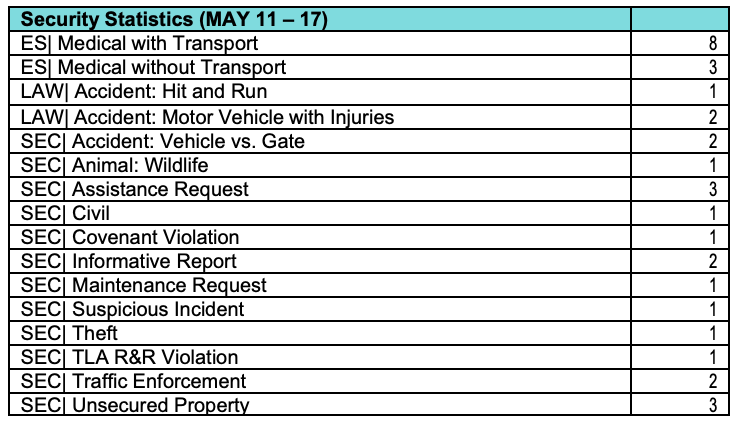